Behind the Scenes with… United Magic Studios 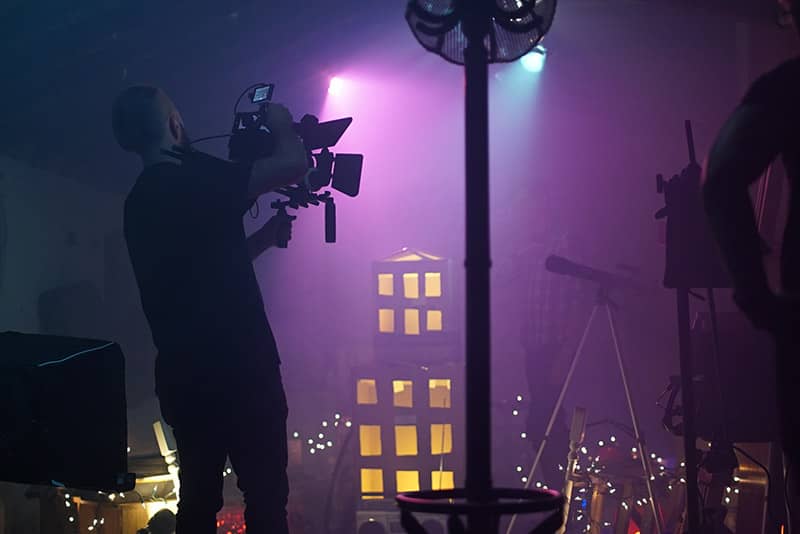 We have been excited to tell you about United Magic Studio’s production of Gun Metal Max, filmed at Copperdollar Studios! It is a fictional 80’s synthwave-inspired film project currently in development. We spoke to the film’s director, Jonathan Brooks, about the progress of their short film, which they’re hoping to make feature-length at a later date.

Hello! Please tell us a little bit about yourself.

My name is Jonathan Brooks. I am a multi award winning film director and owner of Worthing based video production company United Magic Studios.

Can you tell us about the film project you worked on at Copperdollar Studios?

Gun Metal Max is a short film/highlight reel which we’re producing to develop into a feature-length film. The short will enter the festival circuit to gain useful feedback and interest. We’ll then use that data within our funding campaign to develop the feature-length version of the film.

As a production company based in Worthing, where did you first hear about the studio space?

I had spent a lot of time researching locations that would give us the unique look needed for the film. It was important to have an aged/naturalistic setting that felt like a part of a house. The original story took place in a basement, however when I came across Copperdollar Studios through Google. I then decided to change the location to an attic to fit the Hayloft room.

What is your favourite aspect about Copperdollar Studios and what makes it unique from studio spaces you’ve used previously?

What sets Copperdollar Studios apart from other local studios is the character of the building. The raw brickwork and wooden beams offers a textured backdrop that comes out very well on camera. The size of the Hayloft enabled us to create unique setups that would prove difficult in house/barn setting. It also meant we had plenty of space to work with the dress and decorate with props. Our art director noted she had never worked in such a stunning building that gave her so much to work with.

Has United Magic Studios created anything on the scale of Gun Metal Max before?

This is the largest project I’ve directed to date. Even though we only spent 3 days at Copperdollar Studios, there was 18 months of pre production alone just to get us to that point. There were few struggles during the shoot, as much as can be expected when working with a crew of nearly 20. However, it turned out to be an extremely productive shoot which the crew found enjoyable.

Previous film I’ve directed have ranged from documentaries, dramas, thrillers and more recently a stop motion animated film for children. They have all bright about their own unique challenges as any film does, which has only helped towards becoming a better filmmaker.

When is Gun Metal Max expected to finish in post-production?

Gun Metal Max is planned to finish post production in the Spring.

Do you think it’s imperative for production companies like yourselves to offer a diverse range of services in an increasingly modern and digitalised world?

With the increase in online video content, more and more production companies are starting up. With that comes to challenge to stand out and produce even more dynamic content which engages an audience. The advancements in technology has meant that content solely produced for the internet has an incredibly high production quality. So with the development in producing more engaging content, our services have had to increase and evolve with that.

What does the future hold for United Magic Studios and where could we see more of your work?

United Magic Studios has been running for nearly nine years now, since then we’ve produced content for clients all across the world. We’ve always specialised in working with businesses and brands, which has increased dramatically over the past 3 years. We’re now in the process of expanding and setting up a larger studio space to cater for our own production needs.

Thank you to Jonathan for taking the time to speak to us about his fillm!We are excited to see it grow.