Behind the Scenes with… Go Commando 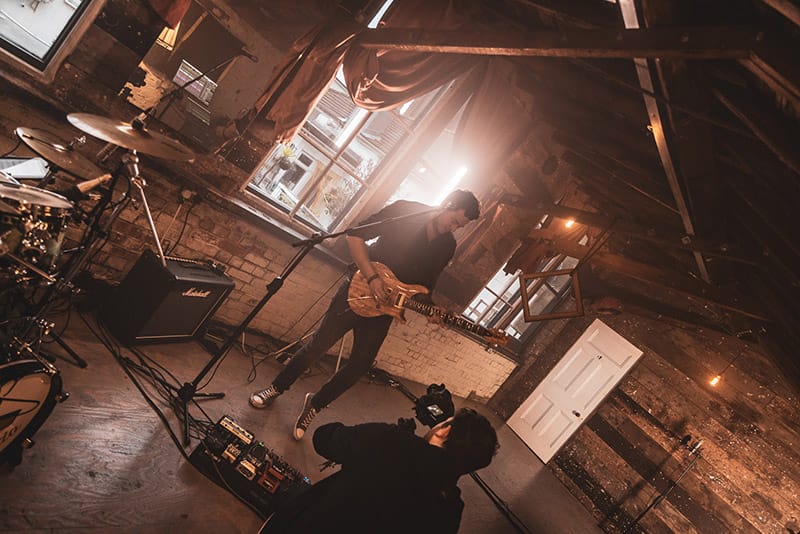 Copperdollar Studios sees artists and creatives from all industries come in and transform it into their own imaginative space. We spoke to the lovely Pete Lowe, frontman of the hugely popular cover band, Go Comando! The band was joined by filmmaker, Matt, from Matchbox Motion Productions for a video shoot so they can introduce their incredible cover videos to a wider audience online. Scroll down to see one of the videos they recorded in The Hayloft!

Can you tell us a little bit about yourself and Go Commando?

Hey, I’m Pete Lowe, Frontman and Guitarist extraordinaire with Sussex based Function band ‘Go Commando’! We’re a trio that specialises in functions, corporate events and weddings. Over the last six years, we’ve performed for thousands of people and at every kind of event you can imagine…Opening Ceremonies, Charity Fundraisers, Festivals, Awards Events and of course Weddings!

We are full-time performers which, in music, is a very privileged position to be in! And we are friends to boost and love what we do. It’s never been a chore anyway. Go Commando is obviously a ‘cover band’ which always makes some people shudder, but this is different. Every last detail of the band is carefully thought about and honed. From the top of the range equipment we use and the awesome setlist, right up to the performance. Everything has to be the very best or we’re not satisfied, in short…we push everything to 11!

What was the project you’ve worked in recently at Copperdollar Studios?

As a band, we’ve been delving deeper into the realms of video and in particular, cover videos. It’s a massively popular market on Youtube and for us a huge opportunity to entertain online and gain some new followers along the way. We brought in our friend Matt from Matchbox Motion Productions to do the filming and editing whilst we would mixdown the audio in-house.

Copperdollar has been on our radar for quite a while and we’ve been wanting to do a project upstairs in The Hayloft for ages! I think I remember originally seeing a model friend using it for a photoshoot and thinking: “hey…that would be a cool spot for a band shoot!”

What is your favourite aspect about Copperdollar Studios and what makes it different from studio spaces you’ve used previously?

Copperdollar is awesome. For us, the fact that it’s old fashioned makes it actually very on-trend and almost modern in a sense.Also, if you’ve watched any videos of other cover bands, you’ll know that they are almost always in front a naff star-cloth with some beautiful woman dancing around at the front. We don’t have that! We wanted to be shot raw, without all the cheesy performing straight to a camera and big fake smiles. We tried to capture the energy of a real performance without all standing in a line and pretending. Video watchers expect more than that nowadays.

As frontman of the band, what attracts you to live music performance as an art form?

I think there is nothing better in this life than to turn your hobby and passion into a way of life. I know we all get great pleasure out of playing our instruments on-stage and the buzz of the crowd but I also know we love the business side of it too. We’re always coming up with new ideas for the show and improving how customers experience our brand. The video is all part of providing more material for our clients and fans to interact with.

What is your favourite genre to play live with the band and why?

It depends which of us you ask! For me, it’s mostly Rock and Blues. Mike the bass player is big on anything with a funky groove and Ollie the drummer is more into popular music and can be caught listening to all sorts. I think our set list covers music for pretty much all ages. If you can sing along or dance to it, chances are we’ll do it!

Where could we see more of the band’s performances?

The one down-side of a great cover band is that nearly all of our gigs are private! Saying that, we do play public gigs just for fun sometimes.. you can head to our website or stay in touch via our Facebook page.

Special thank you to Sussex Media Design for the featured images in this blog and our socials.

It was brilliant to talk to Pete Lowe from Go Comando about their new video project!