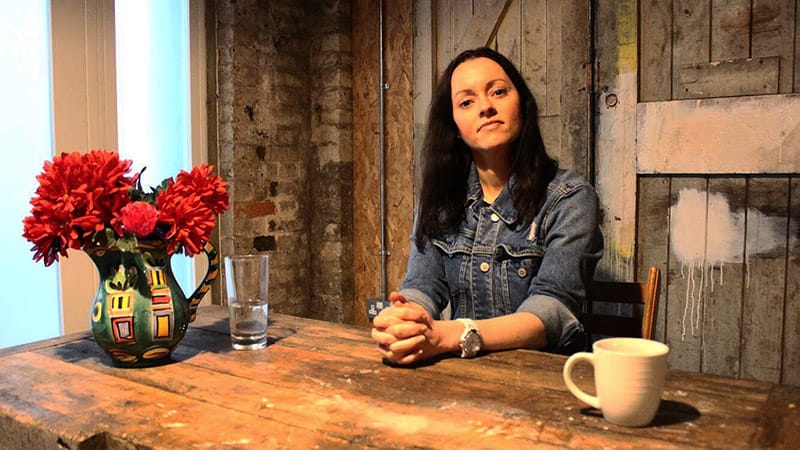 Actor and hypnotherapist, Amy Coutts, returned to Copperdollar Studios to give us her ‘Artist’s Insight’. After coming to Brighton to start teaching English to international students, Amy is also immersing herself in the city’s diverse creative scene. In our meeting, she revisited her acting memories and what inspired her to start on her pathway to becoming an actor. She highlighted the influence of some of her teachers she met along the way, even later training to become a drama teacher herself years later. Right now, she’s working as a teacher and hypnotherapist alongside rehearsals for her exciting Brighton Fringe debut with Eugene Doyen.

Can you remember the moment when you decided you wanted to pursue acting professionally?

I always curse my Year Ten drama teacher, because I think she ruined my life by saying what she said. We were doing a production of Alice in Wonderland and I was playing Mock Turtle. I was an absolute buffoon of a character and I loved it. This is the first thing my parents had come to see me in. I’d been a dancer since I was 15 and I had done public speaking, but my parents had never seen me in a drama before.

When they came to watch this show they were completely shocked! Afterwards, they met my teacher, Mrs Thompson, and they said to her ‘we’ve never seen her do this before, what’s she like as a student?’ and my teacher said to them ‘she’s great I really think she could pursue this as a career. I really think she’s got the talent’. So I took that very seriously [laughs]. I would just spend hours in my room rehearing, I was so self-disciplined with my lines, my character, everything. I pushed myself really hard to be good. I think from about the age of 15 is where it all began.

Was there anyone specific you looked up to in your life who inspired you to act?

I had a teacher a few years ago, and this was when I was in a very low point with acting. The studio I was at, they employed this teacher and her name was Glenda Linscott, famous for her lead role on the show Prisoner. She came in to teach Shakespeare and various other things, so she became one of the teachers of the studio I was associated with that my agent was already running. She just changed things for me, she just reaffirmed that I should just keep going, even when it is tough. She’s very honest, she said to me: ‘No one said it was a fair industry, Amy. It’s not a fair industry and when you can accept that there’s freedom in that.’ She saw something in me. She was an amazing performer in her own right and she was an amazing teacher.

Do you have a preference for screen or stage acting? And why?

I’ve done more stage than television. I’ve always wanted to do more on-screen stuff, but I’m just better at stage. I love getting in front of the camera now, even if it’s just to do a Facebook video. I’m starting to like it a lot more. As soon as a camera was put on me, I used to feel boxed in and suffocated, and it would really take me out of my concentration. Stage has always just felt like home, I always thought I was better at stage. It’s almost like tight-rope walking without the safety net. You’ve got to keep the show going, no-one can yell cut.

How does Brighton’s creative community compare to Melbourne’s artistic scene?

In Melbourne, there are many Fringe shows too. I was involved in co-producing and acting in a few things that we got up off the ground independently. Brighton has community theatre groups, I know of New Venture and Brighton Little Theatre. Melbourne has a lot of suburban theatres in the outskirts of the city. Pride and LGBTQ+ are obviously much more prominent here, but Melbourne does accommodate that community as well. At the moment they’ve got what’s called Midsumma Festival which has lots of cabaret theatre and it’s queer and LGBTQ+.

What has been the highlight of your professional career so far?

A friend of mine, he wrote this script called Kids. He needed a Narrator to read all the stage directions, so I did all of that. It kind of sounds weird, because it wasn’t me being in a role, but just to be in that theatre and say I did this staged reading in one of the theatres with Melbourne Theatre Company. It felt quite amazing being in that space and being able to do a performance. I was really happy I put my hand up and said ‘I’ll do it!’

What projects have you been working on since you last came to Copperdollar Studios?

We’re doing a 90-minute play called The Wasp, and that’s written by Morgan Lloyd Malcolm. I’m super thrilled about this for a lot of reasons. I was in London in 2015 and I was at the National Theatre bookshop just looking for play scripts. This is one of the ones I picked up. I got home, read it, and thought: ‘I need to perform this play’. It’s a psychological thriller. Two female characters…I can’t say too much because it’s one of those plays where you don’t want to say too much about the plot because it’s twisting and turning all the time, and you don’t really know what’s going on or what’s happening. It’s really exciting, and when I got to the last page I was so shocked.

How does meditation and hypnotherapy help you in acting and your daily life?

I remember one audition, where I probably would have gotten the gig. The casting director said they really liked me and wanted to give it to me. I was so nervous that I had basically put myself into a migraine, but I also had an underlying health issue relating to my hormones, which I wasn’t addressing. That’s when I knew I had to do something about it. I started doing meditation and learning new calming techniques and journaling. It made a tremendous amount of difference. I can get quite a busy head, and once I started doing that it just shifted everything, and it’s my go-to coping mechanism now. I’d start getting more creative ideas and have more space in my day.

Hypnotherapy came in much later, only two or three years ago, which was also dealing with a serious break-up. I was listening to a lot of tapes from this woman, and when I found out she was offering to train people I had to do it. I’ve dropped and let go of things that used to plague me, and I’ve started enjoying auditioning and performing again. I feel a little more fearless. It doesn’t have a grip on me like it used to because I feel like I’m living a more holistic life. I’m doing things more for the enjoyment rather than the pressure to get somewhere.

Amy will be performing ‘The Wasp’ at The Purple Playhouse Theatre from May 31st to June 2nd at 8pm as part of Brighton Fringe.

Thank you to Amy for taking your time to share with us what you’ve been doing and for giving us some advice, too.