Behind the Scenes with… Campfire Convention, a new way to network 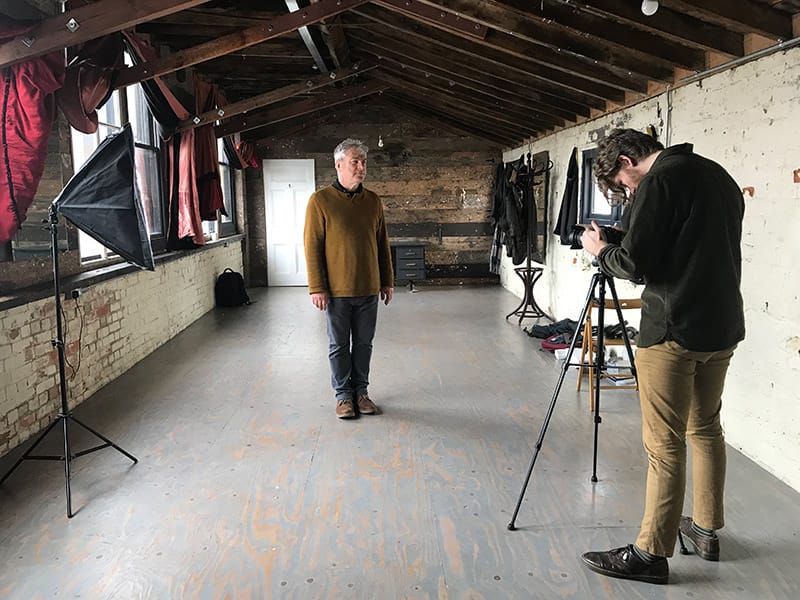 A few weeks ago, Copperdollar Studios welcomed two talented individuals to film for a very special video campaign. Introducing, the co-founder of The Big Chill festival and creator of Campfire Convention, Pete Lawrence and young filmmaker, Josh Harris from Zoo Time Productions. Josh was filming a campaign video for Pete’s crowd fundraiser for a new social network platform (Campfire) without the pressures of the surveillance capitalist model.

Hi Pete! Please could you tell me a little bit about yourself?

I’m probably best known as co-founder of The Big Chill festival which gave early exposure to household names like Lily Allen, Goldfrapp, Amy Winehouse, Gotan Project, Mr Scruff, and Röyksopp. I also ‘ invented’ the chill-out scene, which was vaguely cool until Tony Blair started to use the phrase ‘chill out’.

We had quite a rollercoaster ride really, which will be detailed in my book if it ever comes out!  We had some scary moments but I wouldn’t change it for anything. In many ways, it showed me how empowering communities can be and that inspiration took me forward to Campfire.

What was the project you were working on in Copperdollar Studios and why are you doing it?

I was filming for a crowdfund for Campfire which we launched on May 1st. The space was booked by Josh Harris, who I know from the first Campfire Convention nearly three years ago. He made a great little film about the event and when he heard we were preparing to crowdfund, he offered his services again and I jumped at the opportunity of working with him. I really liked the space and it was great to work in.

Myself and a small team have spent the last four years building the Campfire social network site to the soft launch stage. At a great personal cost, we’ve succeeded in inspiring a growing team of volunteers, writers and event trailblazers to come together to build something of value. We’ve started to grow a network of support around us including people like Brian Eno, our first Patron, but also many others less recognised.

What were your main motivations for starting up Campfire Convention in 2016?

Campfire, in a nutshell, is a social network which attempts to bridge the divide between on- and off-line and giving virtual and face-to-face interactions equal weighting. Already Campfire’s events all over the UK have shown those who have attended the value of meeting in person, being in the physical presence of others and feeling their passions, respecting their ideas and viewpoints. We have developed a core network of quality contributors for the website and are already syndicating the writing of key thinkers and commentators such as George Monbiot, Daniel Pinchbeck and Kate Raworth as well as promoting citizen journalism so please go there, join up and get stuck in!

What are your frustrations towards existing social media networks and how does Campfire Convention diverge from them?

In the wake of the Facebook / Cambridge Analytica scandal, it’s now clear that the ‘surveillance capitalism’ model of social media as an advertising platform is unsustainable, built as it is on monetising data. The full implications of us choosing a digital advertising platform as our presumed ‘safe’ space in which to spill all our most intimate thoughts, hopes, fears and passions are only now being realised.

I am proposing a radical new model for social networking where there’s strictly no advertising or algorithms and we are self-sustaining through our membership model (‘pay what you feel’) and by starting to get things moving at local, grassroots level through Beacon meetings.

We’re not setting ourselves up as a rival to Facebook, just a more ethical way of spending time connecting with people online. We’re more geared towards community activism, building resources and collaborating, a more open source approach to networking as well as the software and the ecosystem we are starting to build.

To donate to Campfire, an incredible new model for social networking, please visit their Fundrazr page.

Hello Josh! Please could you tell me a little bit about yourself and what kind of filmmaking you specialise in?

I am currently freelancing as a videographer, mostly shooting and editing promotional content for corporate clients, but my real passion is fiction filmmaking. My latest short film Loveshack is currently doing the UK short film festival circuit. It was nominated for Best Editing and Best Actress for the British International Amateur Film Festival.

How does Copperdollar Studios differ from other spaces you’ve used creatively?

Upon viewing images of both rooms I was elated to see the amount of natural light available for us to use for Pete’s crowdfunding video. To only have to bring a softbox with me to the shoot was a big relief.

Why do you think Brighton & Hove is such a busy, vibrant hub for film and television production companies?

Brighton & Hove is full of culture, with a vast history of tv and cinema – Duke of Yorks is the oldest still functioning cinema in the UK, classic films like Brighton Rock and Quadrophenia were filmed in Brighton, and of course Ben Wheatley has now made a name for himself as a Brighton based director. Film really does run through the core of Brighton & Hove, so it’s easy to see that these reasons alone have formed such a vibrant hub for filmmaking.

As a young filmmaker, what are your feelings towards starting out in this creative industry?

In the current climate, landing a creative job with good prospectives in a well-established media outlet is tough, which has led a lot of young creatives to make their own work. Mainly freelancing, many of us work for under the rates that we should be getting purely because the opportunities are in short supply. We do these jobs in order to develop our showreels to be noticed by established production companies. Speaking for myself, I create because I love it, so even if the start is tough, I am doing what I want to be doing, so I can’t complain there.

What a fantastic use of the studio space for a great campaign! It was lovely to talk to both for this blog, Pete and Josh.