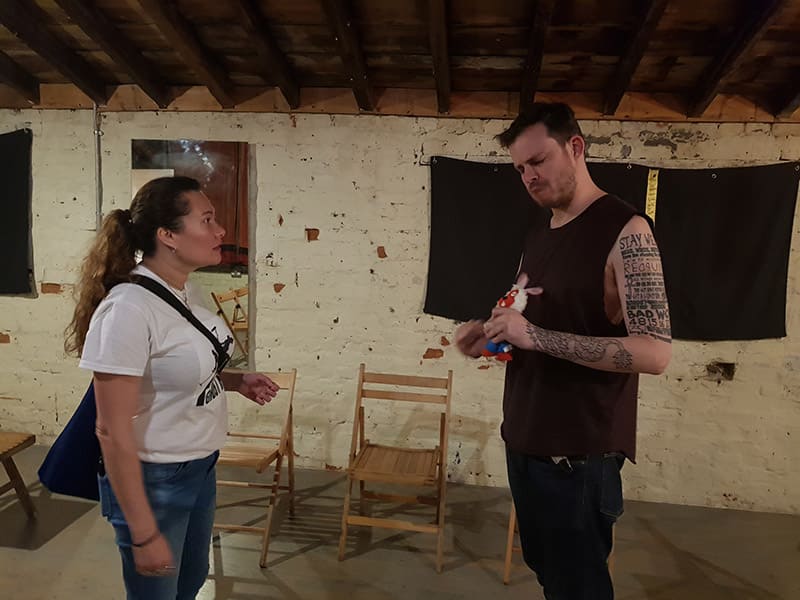 The city’s beloved Brighton Fringe festival is halfway through its programme packed with award-winning theatre, outstanding dance and cabaret, and side-splitting comedy. Copperdollar Studios had the pleasure of welcoming Most Curious Productions to rehearse for their Fringe show, The Hunters of Ghost Hall. We discussed the play with writer and director, Tristan Wolfe, about his motivations to write a supernatural thriller.

Hello! Could you please tell me a little bit about yourself and what you do?

I’m Tristan Wolfe and I am a writer, director and actor. This is the second year I have written, directed and produced a play for Brighton Fringe.

What were you working on recently in Copperdollar Studios?

So we are in final rehearsals for The Hunters of Ghost Hall, which opens on Monday 20th May. We are using the fabulous Copperdollar Studios for this, and the space is perfect for this purpose.

How did you first hear about the space and how did it suit your rehearsals?

We were looking for rehearsal space in a good location, and a good sized space and flexible, so we could set it up as in the theatre.

Could you tell us what your Brighton Fringe show is about?

The Hunters of Ghost Hall is about two TV Ghost Hunters doing prep for a TV show on an empty mansion, at the same time two others enter the mansion looking for something hidden…maybe treasure? Neither pair are aware of each other at first. It’s a bit dark (literally) and at times funny (hopefully), but most of all I hope it entertains. We have four great actors, including an award-winning comedian, and I couldn’t be happier with them. We also have specially composed music from Adam House. The show runs for one hour. There are some flashing lights, and it’s suitable for ages 12 and above.

What motivated you to write a thriller/suspenseful play about ghost hunters?

I started thinking about the past and memories of it during the World War centenary last year. Which led me to ghosts. I then thought to write something entertaining rather than deadly (*ahem* pun intended) serious, knowing full well everyone will be probably Brexit drained and bored of political things.

As writer and director of The Hunters of Ghost Hall, which creative role do you find most exciting?

Obviously, I have a lot to do as director and writer. I have worked with the cast, and workshopped scenes with them, as they got to know the characters. As director, I have to be tough with my own script and be prepared to edit as much as required to make the play look and feel right.

Have you ever been a part of Brighton Fringe before?

This is my second year as writer and director for a Brighton Fringe play. Last year was Finding Yourself Offside, about the struggles of being a gay professional footballer, looking at the possible the reasons why they don’t come out before retiring from the sport.

When is your Fringe show and how can we buy tickets?

The Hunters of Ghost Hall starts on Monday 20th and runs to Sunday 26th May (just before a bank holiday Monday) at 9.15pm every day. We are at Sweet Werks 1, Middle Street Brighton. Tickets are £9 or £7 concessions. You can buy them directly from the theatre or Brighton Fringe, where group discounts are available.

Thanks to Tristan for taking the time to talk to us about The Hunters of Ghost Hall. Break a leg with the shows next week!

For those looking to find out more about the Copperdollar Studios, get in touch today. We’d love to give you a tour. Email info@copperdollarstudios.co.uk!