Behind the Scenes with… Junkboy 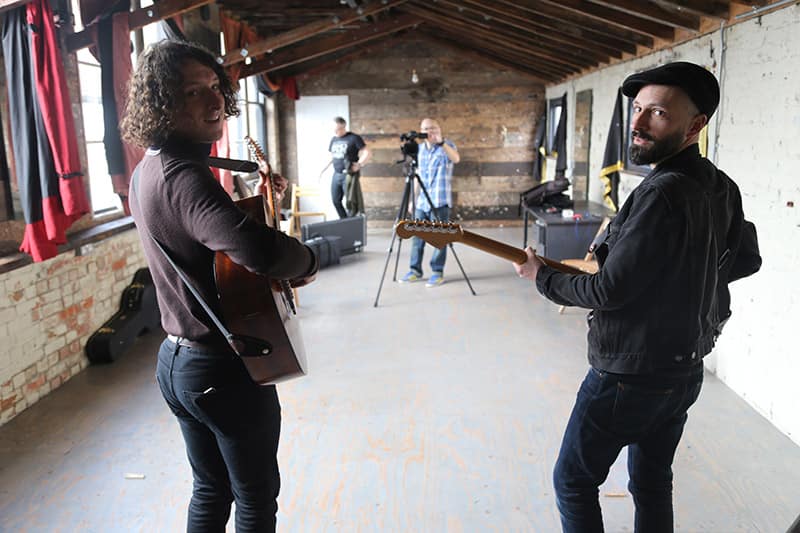 Copperdollar Studios were thrilled to have Junkboy filming some of their brand new tracks in The Hayloft space. The multi-instrumentalist brothers have been working together musically as ‘Junkboy’ since 1999. With exciting times ahead for the band, Rich and Mik Hanscomb spared a moment to discuss their new Brighton base and the release of their first record in almost five years.

Hello Rich and Mik! Could you please tell us a little bit about yourselves?

Rich: My brother Mik and I are a studio band called Junkboy. We’ve been releasing records for around two decades now. We have a new album coming out – our first for Fretsore Records – later on this year called Trains, Trees, Topophilia. The music we make is somewhere between the studio-crafted, exotica-influenced end of the post-rock genre with a heck of a lot of British folk and baroque-psych thrown in there. Well, at least in our heads it sounds like that.

Mik: Rich and I have been making music since the late nineties, over the years our music has evolved to encapsulate different styles but I’d say we’ve always maintained a pastoral, soft psych vibe to our music with strong sense of melody at the heart of everything we create.

Can you tell us about the project you’ve worked on recently at Copperdollar Studios?

M: We recorded footage of Rich and I playing a couple of our new tracks in the Hayloft Studio – a really nice, light, spacious room for shooting! The footage at Copperdollar is basically us playing guitars to the tracks which will be interspersed with extra material shots around Brighton and Southend on Sea, digitally refracted in various ways. A friend of Fretsore Records called Rile shot the video elements and he came down from Liverpool along with Ian from the record label and photographer, Gaz de Vere, a fellow Essex boy it transpired.

How did you initially hear about the studio space and why was it suited to your shoot?

M: Through my girlfriend. She and her friends were involved in a video shoot for a band last year and suggested it would be a suitable space to capture some footage for a Junkboy video as we were looking for a bright space for filming…

R: We spent the previous evening in the dark and dingy environs of a rehearsal room with oil wheel projectors beamed at us making a video. We needed a different palette for the other songs and Copperdollar Studios’ well-lit space was the place.

What makes Copperdollar Studios different from other spaces you’ve used in the past?

R: It’s comfortable and fitted out for actual grown-ups. Coming from a music or ‘bands’ background, hiring rooms furnished for perpetual adolescents is something you get used to but this was different. Classy, a space that prompts creativity, clean toilet facilities, a fridge within date and sufficient milk in it. Lovely stuff.

What motivated your move to Brighton?

R: We grew up in Southend on Sea– lived there for a quarter of a century. It was definitely time to move on. Brighton is a creative paradise isn’t it? Never mind the rapacious landlords and the insufferable smugness that radiates from certain quarters, it’s a genuinely wonderful place most of the time, a completely different mind-set to Southend. That was the motivation behind moving about thirteen years ago. We travel back though to see our parents and friends. Trains, Trees, Topophilia is about the experience of those journeys and the permanence of both relationships and the landscape.

M: Ostensibly it was to study in my mid 20s. We thought would be a good opportunity to finally move out of Southend and we did so in 2006. Brighton and Hove is an expensive place to live, but with the really friendly atmosphere and creative opportunities the town brings, it quickly felt like home. We still love to visit Southend – longing for our home town seeps into the music we make.

Do you get many chances to watch live music around the city?

M: I enjoy watching live music in Brighton, many friends of mine play in bands or are solo artists. I’d recommend Octopuses, Los Feliz, The Dials, Matt Funicane, Soccer 96 among others. I put on a psychedelic club night at Hotel Pelirocco called Eight Miles High, we have liquid projections and play all things psych. Pelirocco staff are really friendly, it’s a nice space and cocktails are second to none if I say so myself.

How is the work going towards Trains, Trees, and Topophilia going? When can we expect its release?

R: The album will be available on all digital formats and on lathe cut (in Seaford, Sussex) vinyl as summer melts into autumn.

M: This is our first for Fretsore Records and it’s been a pleasure working with a label that brings new concepts and ideas to how we do things – like making videos for example!

Where can we hear/see more of your work?

M: We have music available you can buy from all the usual places as well as recommended places like Normans Records or Rough Trade. We have a Bandcamp page and the usual social media sites which can be found by looking for junkboytheband… we’re updating and adding content to these. Hoping to perform live to promote the album when it’s out!.

It was great to talk to you about the new album, Rich and Mik! We look forward to the new album later this year… Thanks for the wonderful images by Gaz De Vere.

For those looking to find out more about the Copperdollar Studios, get in touch today. We’d love to give you a tour. Email info@copperdollarstudios.co.uk!