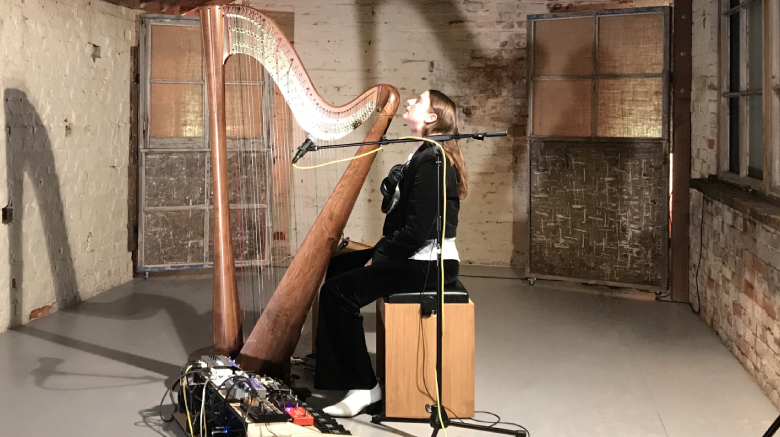 Harpist and singer Ellie Ford will stream her performance from Copperdollar Studios on Friday 20 November 2020.

Ellie Ford is a UK-based songwriter and musician who goes beyond the traditional expectations of her instrument. As a self-taught harpist and singer, she pairs her harp playing with effects pedals, looping and drum sequencers to create a distinctive sound. On Friday 20 November, Ellie will be streaming a performance filmed in Copperdollar Studios showcasing new music from her fourth upcoming album.

Ellie says: “The material I’ve written for this virtual gig is one hundred per cent new music. This is its first airing, so recording is the next step!” So far, Ellie has released two singles this year written and recorded in collaboration with Fred Hills, a musician who helped her realise the importance of groove. “I added percussion on the body of my harp and a drum sequencer into my solo set,” she says. “I’ve become obsessed with industrial broken beats.” Lyrically, the music written for this performance explores themes of society, expression and identity, a fitting reflection after a challenging year.

Undeterred by the closure of arts venues this year, she says: “I try not to approach my work on a transactional basis, as it can leave me feeling very unmotivated. Instead, I take a more holistic approach. I work hard and consistently, and try to trust that it will pay off in the ways I need it to.” Ellie also uses Patreon, a platform for content creators to be supported by their audience, allowing her to have a small sustainable income and continue making music.

Her show was recorded in the Hayloft studio before the UK entered its second lockdown. While some artists choose to live-stream in real-time, Ellie prefers to film ahead of the broadcast to guarantee a high-quality performance. “With my live-streamed performances, I’m conscious to preserve the feeling of a real-life gig. The anticipation, the emotion and the connection. For this reason – and other complications such as poor quality and buffering – I think live streaming on social media doesn’t really work for music performances.” By creating virtual concerts via ticketed private streams, it puts Ellie in control and gives her a budget to work with in creating something worthwhile.

Using effect pedals, Ellie distorts and augments the sounds of her harp and vocals. “I use loop pedals to create ambience and groove in my music. I sync all my gear and instruments together in an absolute monster of a pedalboard and perform a new dance of playing, singing, looping and stomping that brings it all together.” This performance is the finale of a project Ellie has been working on over the past eight months, delving deeper into the world of harp and exploring some of its more unusual uses in songwriting.

Ellie Ford will be playing on Friday 20 November 2020, 8pm as a pre-recorded virtual concert. Tickets are £5 available here.

Looking back at Kick the Pj, YouTuber in the studios
22nd April 2020