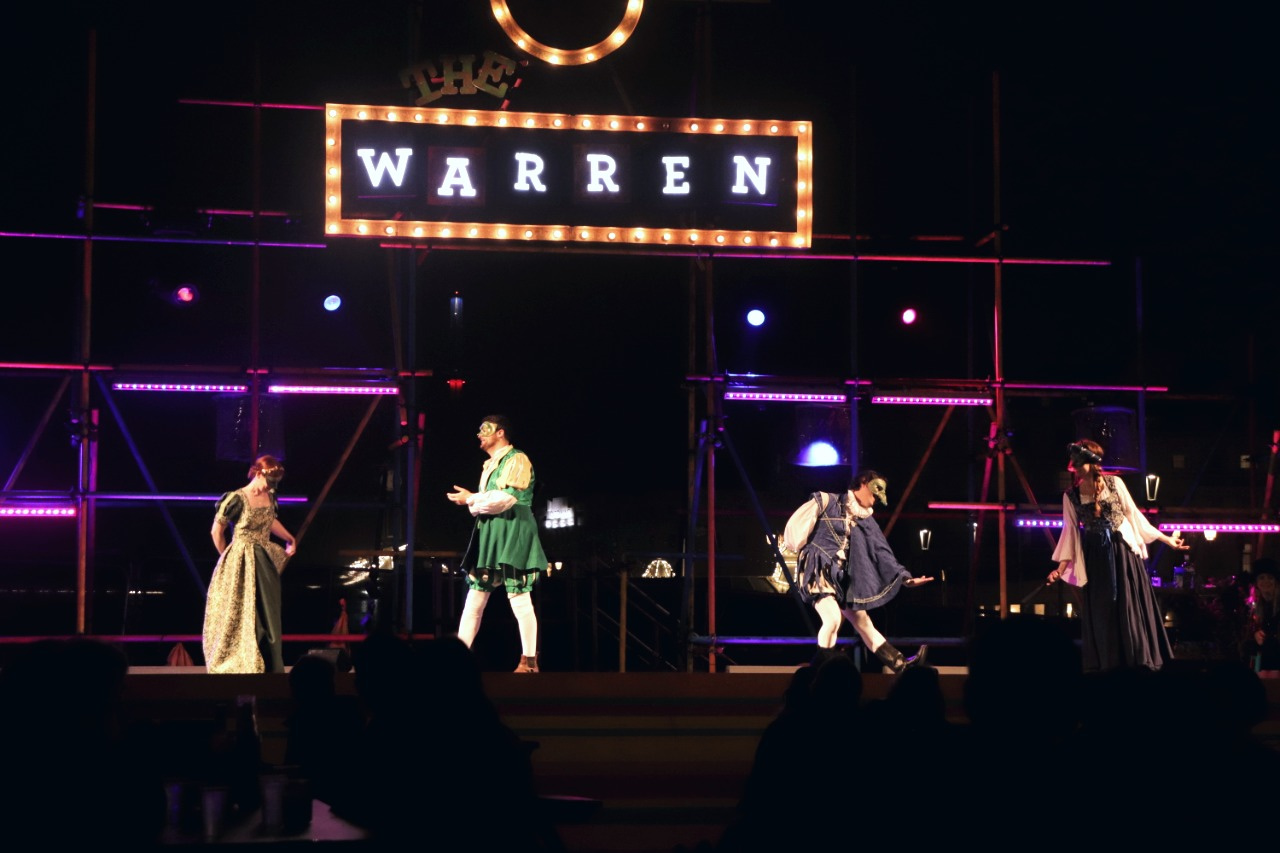 Having heard the legend of Shit-faced Shakespeare for many years, this is the first time I had the chance to see one of their productions. The swirling winds and ominous-looking grey clouds are not enough to not deter a Brighton audience this evening. In fact, The Warren’s new seafront location provides an appropriate backdrop for an hour of Shakespeare, with tempestuous waves lapping in the distance.

This Shit-faced adaptation of Shakespearean comedy A Midsummer Night’s Dream focuses on the lovers’ conflict subplot between Lysander, Hermia, Demetrius and Helena. Puck is also maintained in the story as a mischievous meddler who shares his motivations with the audience. The concept of the show consists of one cast member drinking copious amounts of alcohol over a four-hour period before the show starts. This trope is what pulls the crowd as people eagerly anticipate the impending chaos.

Shit-faced Shakespeare commences with an excellent voguing routine set to Madonna’s iconic single of the same name. No signs of drunkenness appear at the start as Demetrius and Helena converse back and forth seamlessly, with Helena professing her unrequited love. All seems relatively normal apart from the exaggerated declarations of adoration, until the next scene when Hermia and Lysander take to the stage. “I’ve just taken a piss on the pebbles,” Lysander states proudly. “Perhaps not one of Shakespeare’s beautifully-crafted lines,” I think to myself.

The whole show is shrouded in sexual innuendoes as Puck, the sex-crazed fairy uses his “magical flower” to meddle in the love triangle (technically a love square). This sidetracks the plot, and the audience, when Lysander suddenly starts to profess his love for Helena, in which the actor falsely claims is his “sister”.

Onstage, the characters expertly battle through the play to accommodate Lysander’s ridiculous tangents. This makes the whole experience even more enthralling as the show’s host, who is positioned to the side of the stage, sounds her trumpet if the characters divert too far away from Shakespeare. The actor playing Lysander is unapologetically loud and brazen throughout, leading to countless interruptions and even more drinks.

“Theatre has been a tradition that affords audiences with a much-needed cultural respite.”

Prior knowledge of the story is useful by not essential as some of the dialogues break down into complete nonsense, which is extremely funny. You can tell that every performance is different from the bizarre twists and turns in the plot. Although all the actors are expert improvisers (inventing new rhyming couplets on the spot to accompany the scene), even the cast members seem alarmed when Lysander takes the story down a peculiar path of incest.

Due to its eccentricity, I find myself wanting to see Shit-faced Shakespeare on another night just to compare it with another inebriated character on stage. Its spontaneity takes quick wit and expert comic timing from every one of the cast for the performance to flow. Although the focus is on Lysander’s intoxicated shenanigans, Helena always skillfully redirects the show back on track when needed and Puck’s outlandish audience interaction is very charming.

For thousands of years, theatre has been a tradition that affords audiences with a much-needed cultural respite in darker times. Although the show did indeed go on for some theatres as they streamed old performances online, the absence of Brighton’s iconic arts and culture festivals has left a void this year.

Fortunately, the go-ahead for The Warren’s Outdoor Season on Brighton Beach has been a salvation for theatre-goers this summer. The renowned venue has always platformed the weird and the wonderful at Brighton Fringe and the organisers have worked tirelessly to prepare a programme for August and September 2020. If you are able to, support your local theatre this month.

The Warren’s Outdoor Season runs until 27th September. Visit their website for the full programme and to purchase tickets. https://warrenfestival.co.uk/