Behind the Scenes with… Signature Pictures 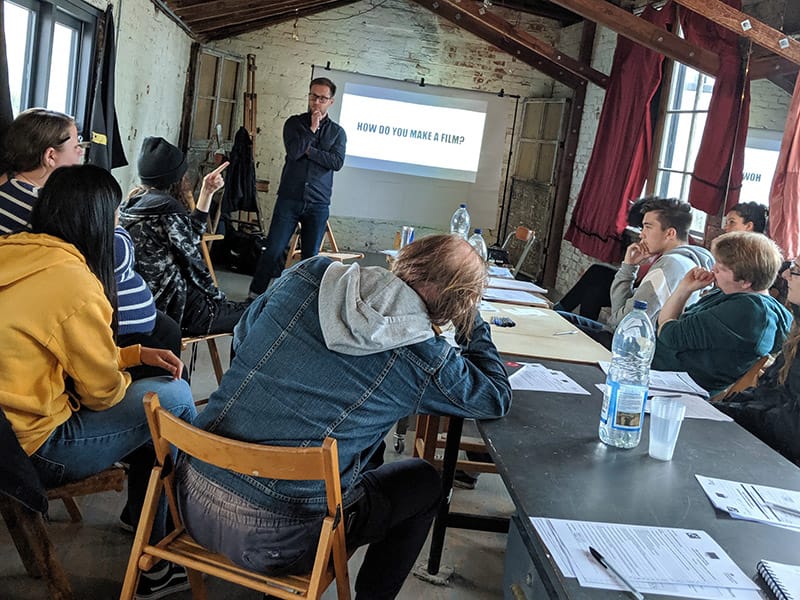 Creative industries are becoming increasingly competitive, with many barriers limiting access to the world of film. Production company Signature Pictures came to Copperdollar Studios to deliver their ‘Get Started’ Brighton & Hove Programme. Training Manager Robert Douglas explained about their flagship programme for young people starting out in film and how their company helps people to break down these boundaries to the industry.

Hello! Could you tell me a little bit about yourselves?

Signature Pictures Academy is an award-winning social enterprise film school providing an access route into the film industry for those from underrepresented groups and disadvantaged backgrounds. Through our outreach, training and support programmes we upskill, enliven and inspire young people from low socioeconomic and underrepresented backgrounds to work sustainably in film production.

To date, we have trained over 300 young people in all aspects of film production, producing 15 fiction films and over 150 pieces of branded content. All trainees have been from low socio-economic backgrounds and over 60% have been Black, Asian or Minority Ethnic and over 50% female.

Films produced as part of our GET STARTED IN FILM programme have played at film festivals across the world, from Palm Springs to Tirana by way of Berlinale. They have premiered at the Institute of Contemporary Arts, been long-listed by BAFTA and won awards at the Critic’s Circle, HBO Short Film Competition and Cornish Film Festival. Press coverage has included set visits by ITV; features in Dazed & Confused and news articles from The Independent and Screen International.

Can you tell us a little bit about the workshop you’ve worked in recently at Copperdollar Studios?

We received European Social Fund funding to deliver a series of workshops for economically inactive young people who live in areas from Croydon down to Brighton. We chose to deliver our flagship Get Started in Film programme in Brighton at Copperdollar Studios! We had 13 young people who took part in the 2 day workshop at the studios which covers all aspects of filmmaking, they also took to the streets surrounding the studios to create a short scene in our 4 hour film challenge. After the workshop our 13 young people get to work on the set of a professional short film, shadowing/assisting the heads of department. This will provide them with the essential skills, contacts and experience to start a career working in the film industry.

I came across Copperdollar on Instagram when looking for suitable, cool venues in Brighton.

What is your favourite aspect of Copperdollar Studios and what makes it different from other spaces you’ve used previously?

The cool atmosphere and quirky spaces are perfect for creating a workshop in a non-traditional setting, particularly for creative minds. Its central location was another plus point for us!

How did Signature Pictures first become a social enterprise?

Signature Pictures was formed in 2013 by founder Jon Max Spatz. After he completed work on set of the Harry Potter series of films he found himself unemployed and unable to find work in film. After a series of uninspiring visits to the Jobcentre he decided to form Signature Pictures with the social enterprise aspect in mind. His goal was for every film he makes to include 12 unemployed or underrepresented young people in production. Following receiving £3,000 seed-funding, Signature Pictures is now an established and award-winning social enterprise film production company partnered with Jobcentre Plus, the Prince’s Trust and a range of charities nationally.

What is the greatest challenge facing young people entering the film industry today and how do you try and combat this?

There are so many challenges for anyone to get into the film industry but for those from a low-socioeconomic background, it is even tougher. Unfortunately, talent and hard work are not enough for people from this demographic to access the industry and it’s a huge problem. There’s still a huge lack of diversity in production roles, expensive fees for film school, who you know not what you know, and the pitfalls of working as a freelancer are all barriers for young people without privileged support systems in place.

We exist to provide a new route into the industry by giving these young people the skills, knowledge and contacts to get a foot in the door we kind of act as that support system as much as we can. We also then support them with further work and training opportunities through our extensive network of contacts to help them work sustainably in the industry.

What plans do Signature Pictures have for the future?

We will be running lots more Get Started in Film programmes in the future with plans to expand the Academy and provide even more robust support for our alumni. We are also adapting the programme to work with feature films mid 2020! Some really exciting developments in the pipeline.

We are also looking for future funding and funding partners so spread the word and get in touch and we can have a chat.

Where could we see more of your work?

Great to have Signature Pictures in the studio who create incredible programmes for young people!

Behind the Scenes with… Aya Qadi, discussing mental health, fitness & wellbeing
10th May 2021