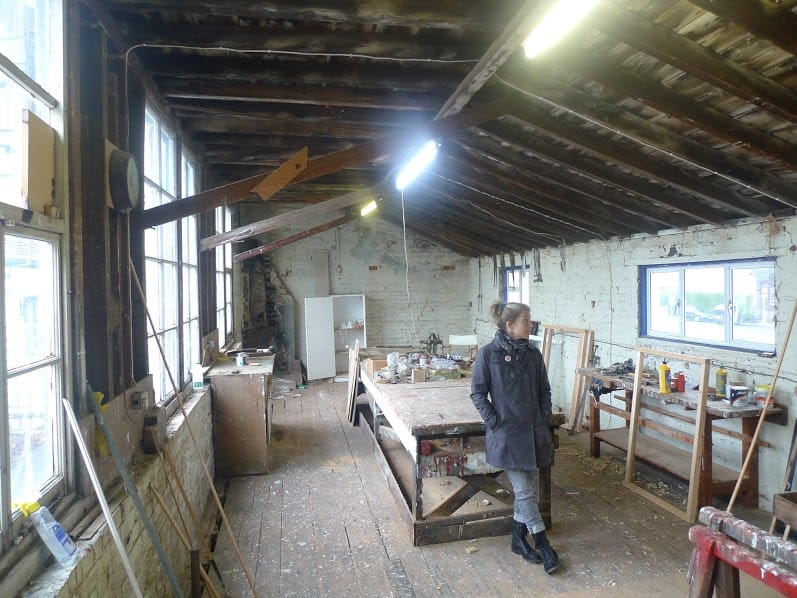 This month marks the 2nd birthday of the Copperdollar Studios. 22 Montague Street has, however, been around for a lot longer. As anyone who has been in the studios will agree, the building is bursting with character and its interior is one of a kind.

It started out as a stable for horses but became a builders merchant in the early 1900s before turning into a carpenters workshop in the early 80s. The building was bombed during World War 2 and lost one of its corners. Kt had been keeping her eye on the workshop as she lived in the local area and asked the owner, Peter, to let her know if he ever came to sell it. 7 years and a series of fortunate events later, she purchased the space with the intention of creating a studio for performance makers like herself.

There was a lot of work to do but with the help of architect Piers Taylor, her husband and woodwork specialist Marc Ellis and a number of creative and dedicated builders (namely Yuval, Olly, Lui, Ivan and Joe), Kt was able to transform the workshop into two beautiful, unique studios. 2 years on, they are being hired out by theatre groups, photographers, videographers and many other artistic people.

As you can see from the before photos, reconstructing the building was a complex task. After a plan was put together with Piers, the first part of work took place and lasted 4 months: Marc rebuilt the roof, the floors, the installation and oversaw the whole build. The second part was carried out mostly by local builder, Yuval, and following 5 more month of conversions and decoration by Kt, the studios were completed. There were 3 fundamental concepts behind the Copperdollar Studios development:

P.S : This post is the second in our new blog series, ‘Flashback’, where we look back over the history of Copperdollar. Our first ‘Flashback’ was an overview of the Copperdollar Immersive Performance Company, if you missed it then you can check it out here.

Did you enjoy this weeks post? Feel free to leave us a comment and let us know what you think.